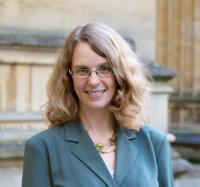 Natalia is a historian of late medieval and early modern Europe. She has worked on the fifteenth-century Polish monarchy, the early Reformation and printing revolution, and written a prize-winning study of a Jagiellonian cardinal, Church, State and Dynasty in Renaissance Poland: the Career of Cardinal Fryderyk Jagiellon 1468-1503) (Routledge, 2007). Her latest publication is King Sigismund of Poland and Martin Luther: The Reformation before Confessionalization' (OUP, 2018)-  the first major research monograph to consider the impact of the early Reformation right across the Polish monarchy for over a century.

She has been a Fellow and Tutor in History at Somerville College, Oxford University, since 2007.

A team of postdoctoral researchers worked on the Jagiellonians project from 2014 - 2016.

Ilya Afanasyev After graduating from the Faculty of History, Moscow State University, Ilya came to Oxford to write hisdoctoral thesis on the construction of national categories in twelfth-century England and then joined the Jagiellonians project . In October 2016, he joined the University of Birmingham as BRIHC Research Fellow. In 2015, he set up ‘The Long History of Identity, Ethnicity and Nationhood’ research network, which now unites BRIHC, The Oxford Research Centre in the Humanities, and The Institute for Medieval Research in Vienna, as well as individual scholars from various institutions in Asia, Europe and North America.

Giedrė Mickūnaitė  Giedrė is a medievalist and art historian, whose research inquires into relations of textual, pictorial and mental imagery in late medieval and early modern periods. Recently, she has investigated the notion of the “Greek” image in the Catholic milieu of Eastern Europe, with special emphasis on the Grand Duchy of Lithuania.

Dušan Zupka  Dušan is a historian of medieval and early modern Europe focusing on cultural and political history. He wrote his PhD. thesis at the Comenius University in Bratislava and Utrecht University and worked as a postdoctoral research fellow at the Central European University in Budapest. Among other writings on medieval communication, power and rituals, he has published a book Rituals and Symbolic Communication in Central Europe. Arpadian Hungary 1000-1301 (2011) and an article on medieval urban literacy within the Utrecht Studies in Medieval Literacy series (2014). He is currently Faculty Member at the Comenius University in Bratislava.

Susanna Niiranen received her Ph.D. at the University of Jyväskylä, Finland, focusing on the Occitan women troubadours. She has a European diploma in Medieval Studies (Vatican Library, Rome by Fédération des Instituts des Etudes Médiévales). She worked as a postdoctoral research fellow on the projects Philosophical Psychology, Morality and Politics Research Unit; Academy of Finland programme of centres of excellence in research; and Medieval States of Welfare, Academy of Finland. Her own postdoctoral project was called `Medicine without Doctors: sexuality, sleep and sound mind' and examined the determinants of health in medieval vernacular remedy tradition.Her publications concern various aspects of medieval literature, medicine, gender, and transmission of knowledge.  She has also co-edited a wide-ranging handbook of medieval studies, the first medievalist’s manual in Finnish, and has a longstanding interest in Katarina Jagellonica.

Tomasz Gromelski’s research interests are in the intellectual and social history of Europe between 1350 and 1650 and in material culture and everyday life in medieval and early modern Britain and Europe. After completing his MA at the University of Warsaw Tomasz came to Oxford where he received his DPhil in 2008 and where he has been based ever since. He has also worked as a lecturer and researcher in Cambridge, Reading, at Oxford Brookes, the European University Institute in Florence and the Institute for Human Sciences in Vienna. He is currently completing a study of political thought and political culture in Poland-Lithuania in the sixteenth century. Tomasz also has a great interest in education on all levels – he is a Fellow of the Higher Education Academy and has primary and secondary school teaching qualifications.